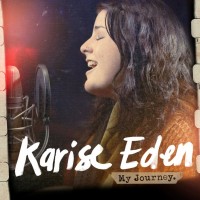 Karise Eden drops from the No.1 spot on the singles chart, but claims the new No.1 album in the country with instantly platinum certified “My Journey”, which is also the sixth consecutive No.1 debut in the past seven weeks.

Gavin Ryan reports that the last time we saw six consecutive No.1 debuts was between mid-March and late April of 2010 with Avril Lavigne, Glee Volume 5, The Strokes, Britney Spears, Drapht and The Foo Fighters the six acts to enter first week at the top of the ARIA Albums chart.

“My Journey” is the 310th No.1 debut in Australian Albums chart history (1965 to 2012) and the 649th No.1 album during that same period, whilst it’s the 508th ARIA No.1 album (1983 to 2012). It also becomes only the second album with ‘Journey’ in its title, the previous being Damien Leith’s “The Winner’s Journey” from December 2006. And as Karise is a local reality shows winner/contestant, she becomes the ninth such act to top the charts here (thirteen if you want to include overseas winners like Paul Potts, Leona Lewis or Susan Boyle twice).

There is also a No.2 debut this week, the fifth album for Linkin Park entitled “Living Things”, which becomes the bands fifth top two album (all five studio albums have reached No.1 or No.2) and its their sixth Top 10 entry overall. This album’s lead single “Burn it Down” returns to the Top 100 this week at No.41, and the bands Australian chart discography is listed below…

Keith Urban’s “The Story So Far” only drops one place this week, down to No.3, but last weeks No.1 debut of “Believe” for Justin Bieber drops four places to No.5 this week. One Direction has the No.6 position this week with their “Up All Night” album, but down four spots to No.7 is Missy Higgins with her former No.1 “The Ol’ Razzle Dazzle”.

The “Rock of Ages” soundtrack blasted into the Top 5 last week, but drops from No.4 to No.9 this week, with late July tourist Ed Sheeran’s “+” dropping four places to No.10. The final Top 10 entry of the week is the ninth studio album for The Smashing Pumpkins, which debuts at No.8 entitled “Oceania”, giving them their seventh Top 10 entry. Their entire Australian chart discography is also listed below…

NEW PEAKS & MOVERS: Helped by a return to No.10 for “Pound the Alarm”, Nicki Minaj’s “Pink Friday- Roman Reloaded” jumps back up twenty-two places to No.14, plus the explicit edition of the album comes out this week. With promo visits at the moment, two female singers each climb up twenty-three places apiece, with Katy Perry’s album “Teenage Dream: The Complete Confection” back up to No.25, and Carrie Underwood’s “Blown Away” is back up to No.30. James Morrison scores the only new peak within the Top 100 this week, as his “The Awakening” album jumps up nine places to No.32. Ahead of their upcoming tour, fun. jump up twenty places to No.46 with their “Some Nights” album, after a big return last week at No.12, Paul Simon’s repackaged “Graceland” album drops to No.36 this week.

The fourth studio album for New York native Fiona Apple entitled “The Idler Wheel is Wiser than the Drive of the Screw and Whipping Cords will Serve you More than Ropes will Ever Do”, more simply known as “The Idler Wheel…”, which by debuting at No.23 becomes her highest charting album in Australia, having previously charted with three albums; “Tidal” (HP-43, peaked March 1998), “When the Pawn…” (HP-54, peaked Feb 2000) and “Extraordinary Machine” (HP-53, peaked November 2005).

The adoptable pet’s game Moshi Monsters scores a No.31 debut this week with an album of songs entitled “Musix Rox!”, and debuting at No.34 is “Welcome to the Fishbowl” for country singer Kenny Chesney. This is his thirteenth studio album, and now his second to chart here, having previously made it to No.73 in October of 2010 with his twelfth album “Hemmingway’s Whiskey”.

French heavy-metal band Gojira debut at No.47 with their fifth album entitled “L’Enfant Sauvage”, which is their first to chart in Australia. And also making her first chart entry here is UK singer Paloma Faith with her second album “Fall to Grace”, which comes in at No.49. Her first album “Do You Want Truth or Something Beautiful? (2009) failed to make our Top 100.

Lower 50: Not much movement in the lower half of the chart this week, but returning albums include “Reece Mastin” at No.76, Elton John’s “Rocket Man: The Definitive Hits” at No.92 and “Nothing But the Beat” for David Guetta at No.97. The biggest dropout of the week was last weeks No.23 return of “Get Closer” for Keith Urban, which disappears from the Top 100 this week.

Melbourne based five-piece King Cannons (electronic soul-and-roll) enter at No.56 with their debut album “The Brightest Light”. L.A. melodic metal-core band The Ghost Inside debut at No.63 with their third album entitled “Get What You Give”, their first to chart here, and the final new entry of the week goes to the soundtrack to the new Pixar film “Brave”, which debuts at No.95.

Gavin Ryan is the founder of Australian-Charts.com

Billie Eilish's mother Maggie uses social media to reach out to her daughter's fans and help those who are suffering with mental health issues.

Australian Charts: Billie Eilish Album Is Back At No 1

Thanks to a slew of Grammy Awards this past week, the debut album for Billie Eilish called "When We all Fall Asleep, Where Do We Go?" reclaims the No.1 spot in Australia for an eighth overall week at the ARIA Albums summit.

Australian artists continued to be disadvantaged by the current ARIA chart formula with the 2019 End of Year chart once again having no Australian albums in the Top 10.

The new Official Chart: First Look offers a first glance of the Top 20 ahead of Friday’s Official Singles Chart Top 100. The chart is based on preliminary sales and early streaming reports.

Australian Charts: Tones and I ‘Dance Monkey’ No 1 for 17th Week

Toni Watson under her moniker of Tones and I and her second single "Dance Monkey" continues to swing at the top of the ARIA Singles Chart tree for a continual record-breaking seventeenth week at #1.

Australian Charts: Tones and I ‘Dance Monkey’ Is Number One for 16th Week

Setting new records in Oz and around the world this week is Tones and I with her "Dance Monkey" track, now claiming a record-breaking 16 weeks at No.1 on the ARIA Singles Chart.

Australian Charts: Tones and I Logs Up 15 Weeks At No 1

Equalling this week the 2017 achievement by Ed Sheeran of spending 15 weeks at No.1 on the ARIA Singles Chart is the Tones and I track "Dance Monkey".