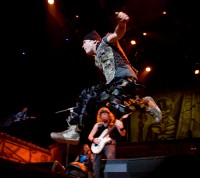 It includes bona fide classics like ‘Run To The Hills’, ‘The Number Of The Beast’, and strangely appropriate ones like ‘Fear Of The Dark’, ‘2 Minutes To Midnight’ and ‘Seventh Son Of A Seventh Son’ (assuming you’re trying to lull your little boy to sleep).

The album Lullaby Versions Of Iron Maiden is available from iTunes and Amazon, but we can only recommend mums and dads also keep the real Maiden’s Greatest Hits around for daytime. You’re never too young for metal.

Check out some samples below.