Maroon 5, Evermore and The Cab To Tour - Noise11.com 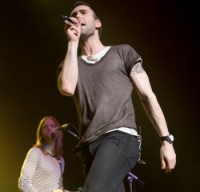 Maroon 5, Evermore and The Cab To Tour

Maroon 5 will head to Australia in October for dates with Evermore and The Cab.

It will be a short visit with just two dates announced for Sydney and Melbourne.

For the newly independent Evermore it will be their first exposure of their new music. Joining them, Las Vegas three-piece The Cab.

Tickets go on sale on July 3.

Dates for Maroon 5, Evermore and The Cab are:

Tagged as: Evermore, Maroon 5, The Cab

Evermore’s Jon Hume is the uncredited featured vocalist on the Galantis and East & Young hit ‘Make Me Feel’.

Tina Arena will release her first English language album of original songs since 2001 in October.

Evermore have contributed to the Global Poverty Project with the song ‘One Love’ and will perform at the Golden Citizen Festival from Melbourne in September.

The Australian music industry is planning a Sydney-sized farewell for Aaron Chugg, who died on March 18 from complications from a stroke he had while tour managing The Stone Roses.

Evermore have handed the way their next video looks over to the fans.

An absolutely thunderous crowd shouted at the top of their lungs on Friday (12th of October) at Melbourne’s Rod Laver Arena for one of the biggest pop bands in the world, Maroon 5. There was definitely no questioning whom this audience had come to see.