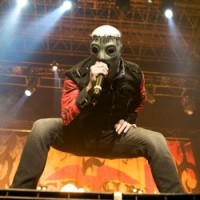 The Melbourne leg of Soundwave has sold out in record time, with Brisbane and Sydney to follow.

Mega-metal/punk/hardcore/alternative rock festival Soundwave have announced that the Melbourne date of Friday 2 March 2012 has already sold out.

They also warn Sydney and Brisbane fans to get moving if they haven’t bought tickets yet, as those two are selling fast.

It’s the biggest line-up yet, and while Hole have dropped out, there’s still a monster line-up including Marilyn Manson, Limp Bizkit, Slipknot, System Of A Down, Machine Head, Lamb Of God, Bad Religion, The Used, You Me At Six, A Day To Remember, Trivium, Angels & Airwaves, Mastodon, Dillinger Escape Plan and, obviously, scores more.

For Melbournians who missed out and feel like a roadtrip, the full dates are below.

Daft Punk climbs a place from their No.2 debut last week to claim the ARIA Singles Chart crown with the track “Get Lucky”, making them the first French Group to take the honor, plus the track is now Gold (●) in sales.

Pink had the biggest selling album of 2012 in Australia with 'The Truth About Love.

Paul and Dan Kelly, The Bamboos with Tim Rogers, Lanie Lane, and more will perform at the 2012 Jagermeister Independent Music Awards.

Here is the line-up for Parklife 2012 and it includes The Presets, Nero and Passion Pit as well as Plan B, Tame Impala and Chairlife.

Beck and Sigur Ros Expected To Appear On Harvest Festival, 2012

Fans of Sigur Ros and Beck fans had better make sure they have some festival money lying around because the second annual Harvest Festival is expected to be announced soon and according to one industry insider, Sigur Ros and Beck going to be on it.