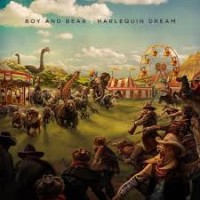 It’s a small race for the No.1 album spot this week between local favorites Boy & Bear with their second album “Harlequin Dream” and US rapper and OddFuture member Earl Sweatshirt with his second album “Doris”, which features Frank Ocean, Tyler the Creator, Mac Miller and RZA.

Making return Top 10 appearances could be RÜFÜS, Pink, Imagine Dragons, Passenger and Fleetwood Mac, with a possible entry for Bastille and their “Bad Blood” album. Looking for a Top 20 entry is Luke Bryan with his current US No.1 album “Crash My Party”, whilst Bruce Springsteen could be back in with his “Greatest Hits” collection and “Born in the USA” albums, thanks to a tour announcement and his 60 Minutes appearance last Sunday night.

There’s possible entries also for AwolNation and “Megalithic Symphony”, “The Mortal Instruments: City of Bones” Soundtrack, “Offspring Series 4” TV Soundtrack, “Hollow Bodies” for blessthefall, “Three Kings” by TGT and after the ABC re-screened the Queen documentary, their “Greatest Hits” collection could return this week too. We could also see “Among the Wildest Things” by Noah and “Songs from St. Somewhere” by Jimmy Buffett also enter in the lower part of the Top 100.

Singles: Katy Perry’s half-week of sales for “Roar” last week helped it to a No.3 debut, whilst this weeks after a full seven days of downloads, it looks set to roar up to the No.1 spot, giving Jason DeRulo just a single week at the top with “Talk Dirty”, which could only drop to No.2, with Avicii and Aloe Blacc contending for the No.3 spot with “Wake Me Up”.

Lana Del Rey’s remix of “Summertime Sadness” by Cedric Gervais could become her second Top 10 hit and possibly first Top 5 entry as it looks set for a berth within the five along with songs by Lorde or even Ellie Goulding. Also retaining Top 10 placements could be Karmin, OneRepublic, Flo Rida & Pitbull and possibly Naughty Boy with Sam Smith.

Lady GaGa could rise from her No.19 debut with “Applause” and Imagine Dragons might also gain a new peak with “On Top of the World”. We could also see Lorde gain a second Top 20 hit as “Tennis Court” looks set to soar, whilst Jessie J and her new track “It’s My Party” could land first week inside the Top 20.

Emeli Sande could finally land a hit out of “Read All About it Part 3”, as it’s currently placed within the high Top 30, and Bastille’s recent quick tour has helped their song “Laura Palmer” up into the Top 25. After a couple of weeks at No.36, “Sail” by AwolNation looks set to jump up about ten places. Bad Raiders came back in at a new peak of No.44 last week, and look set to maintain a Top 50 position this week with “Shooting Stars”, with HAIM looking set for their first fifty berth, as their latest “The Wire” could leap from last weeks No.83 debut into the lower fifty, with a possible debut for Enrique Iglesias and “Turn Up the Night” in the same region.

Lower 50: The Arctic Monkeys look set to debut this week with their new single “Why’d You Only Call Me When You’re High?” in the higher end of the Top 60, and the new track for Paramore entitled “Ain’t it Fun” could enter within the same region of the chart. Keith Urban look set for “Shame” to enter from his forthcoming “Fuse” album, and John Mayer has “Wildfire” set for a Top 80 entry this week ahead of his album “Paradise Valley” out this coming Friday.

Missy Higgins and The Cat Empire Set For Summersalt 2021

And we have a concert announcement … The Cat Empire, Missy Higgins and Boy & Bear have been announced for Summersalt 2021 in Adelaide.

The Presets and Boy & Bear Head Up Drop Festival Lineup

The Presets and Boy & Beard head up a superb lineup of acts for The Drop Festival, touring around the country from February 2020.

Melbourne’s newest music event A Weekend In The Gardens attracted 12,000 music fans to Melbourne’s Royal Botanic Gardens on the weekend with an all-Australian line-up.

After a year of touring the world, Boy & Bear have planned a major tour of regional Australia for November and December.