Music Festivals and Concerts Not Expected To Return Until 2021 - Noise11.com 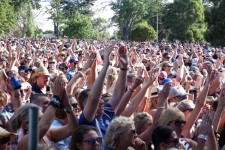 Music Festivals and Concerts Not Expected To Return Until 2021

Professor of healthcare management Zeke Emanuel has “no idea” how event promoters are rescheduling music gigs and festivals for later this year amid the coronavirus pandemic, saying he doesn’t understand how they think it’s a “plausible possibility”.

The Professor told the New York Times newspaper: “Larger gatherings – conferences, concerts, sporting events – when people say they’re going to reschedule this conference or graduation event for October 2020, I have no idea how they think that’s a plausible possibility.

“I think those things will be the last to return. Realistically we’re talking fall 2021 at the earliest.”

Several high-profile music festivals, including Glastonbury, have already been cancelled due to the pandemic.

Glastonbury organisers Michael and Emily Eavis explained at the time: “We are so sorry to announce this but Glastonbury 2020 will have to be cancelled and this will be an enforced fallow year for the festival.

“Clearly this was not a course of action we hoped to take for our 50th anniversary event, but following new government measures announced this week – and in times of unprecedented uncertainty – this is now our only viable option.

“We very much hope that the situation in the UK will have improved by the end of June.

“But even if it has, we are no longer able to spend the next three months here with the thousands of crew here on the farm, helping us with the enormous job of building the infrastructure and attractions to welcome more than 200,000 people to a temporary city in these fields…”

John Farnham will perform a second show for Red Hot Summer at Bribie Island in February.

Comedian Chelsea Handler will perform in Sydney, Brisbane, Perth and Melbourne in November.

Taylor Swift will return to Australia in December for her Red tour.

Van Halen, Aerosmith Arrive For Day One Of Stone Fest In Sydney

Van Halen will headline day one the first ever Stone Festival in Sydney today with a line-up also featuring Aerosmith, Jimmy Barnes and supergroup Kings of Chaos.

Lindsey Buckingham has announced a short tour of the U.S. west coast for May. The tour opens on May 3 in Solona Beach, CA and runs through May 21 in Spokane, WA.

Tickets to see Earth, Wind & Fire, presented by Noise11.com, is now on sale.