Bob Dylan still has the ability and surprising agility to shoot the occasional missile deep into our hearts and minds. The title of his latest release ‘Murder Most Foul’ comes directly from Shakespeare’s Hamlet, a fitting reference since Bob’s opus deals with the assassination of John F Kennedy, surely the last great leader of the U.S.A. – his death indeed a ‘Murder Most Foul’. 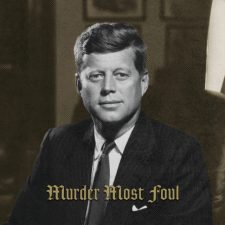 The song teases us with information of what we know and don’t know about the murder, about the players, the plotting and the aftermath. Bob’s now tired old voice growls surprisingly clearly through the 17 or so minutes here. The music is static, limpid, chords, soft cymbal beats and notes suggested and teased out, rather than truly set down. Yet it all suits the words as smoothly as a tailor’s perfect bespoke cut.

If ever you read the liner notes on the back of those classic albums of his, ‘Another Side Of Bob Dylan”, ‘Bringing It All Back Home’ or ‘Highway 61 Revisited’, you’ll understand the time shifting, stream of consciousness, quick talkin’ style of the writer here, much the same style as he fashioned in his strange, but intriguing autobiography ‘Chronicles’.

The Dallas killing may have marked the moment we lost our freedom, even lost our true democracy, so it is indeed a fitting moment in time to return there.

Bob’s timing with this YouTube release is perfect. Having obvious fun, he plays it forward too, the second part of the piece referencing The Who, Queen, Carl Wilson, Don Henley, Dicky Betts, Stan Getz, Patsy Cline, Stevie Nicks, even Altamont and Woodstock.

Time travelling, unravelling a whole pile of decades in one single leap, the scope of the work is wide and immense. What to make of it? Dylanologists will probably have a field day here, but ‘yours truly’ is happy to play it over and over, let the relevant phrases fall out once at a time, and they sure do – like diamonds hidden in the lining of a dusty old bag.

I’ve been a fan and follower since my older cousin played me Bob’s debut album back in ’63. That record introduced me to a whole new world of realities and possibilities, introducing wrong-doing men and righteous heroes that fashioned my moral position, influenced my entire life.

Still the man keeps surprising us. I can only hope young folks are listening to this too. They need to see how far we’ve come, maybe arrest the blind ‘progress’ that leads us on to what seems like a thoroughly unwanted destiny.

So thank you Bob, and may you enjoy all your remaining time, and the effect you still have on us all.