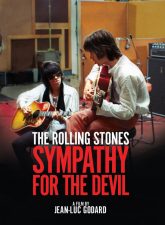 The Rolling Stones Sympathy for the Devil

Jean-Luc Godard’s ‘Sympathy For The Devil’, documenting the creation of the Rolling Stones classic of half a century ago, has been restored for rerelease in 4K vision.

‘Sympathy for the Devil’ was originally released in 1969. The movie was filmed using a 35mm camera. It features The Rolling Stones original line up of Mick Jagger, Keith Richards, Brian Jones, Charlie Watts and Bill Wyman were joined by Nicky Hopkins, Marianne Faithfull, Anita Pallenberg and James Fox in the landmark session that took place at Olympic Sound Studios in London in June 1968.

According to the distributor, “the expanded rerelease of the film includes numerous extras including the entirety of One Plus One (Godard’s director’s cut) as well as Voices, a 1968 documentary on the making of Sympathy For The Devil, along with a 2018 documentary featuring interviews with Tony Richmond and Mim Scala, one of the film’s producers. Additional extras include a full-length commentary track by Godard authority David Sterritt, former Chairman of the National Society of Film Critics, and the physical package showcases an essay by author Danny Goldberg (In Search of the Lost Chord: 1967 and the Hippie Idea, Dispatches From The Culture Wars). Goldberg wrote, “Musically, the film shows the Stones manifesting a fragile balance between fidelity to roots and to innovation. Created more than a decade before MTV began, Sympathy For the Devil can be seen as a long music video, completely unique at the time in showing the work and creativity that goes into the making of a record.”

Screening in cinemas across America will precede the DVD release. The film will be shown at The American Cinematheque’s Egyptian Theater in Los Angeles on Friday, September 7 and it will have a week long run at New York’s Museum of Modern Art Thurssday, September 13 through Friday, September 19.** Tony Richmond will be on hand at the Egyptian on September 7* and MoMA on Thursday, September 13th for post screening conversations. Peter Rainer, film critic for the Christian Science Monitor and president of the National Society of Film Critics will moderate the discussion at the Egyptian while Josh Siegel, curator of the department of film at MoMA, will moderate the post screening conversation on September 13.