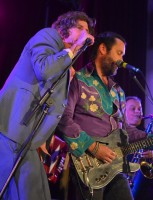 The band, who had played for over an hour and a half, joked that they were excited to invite a special guest who happened to be in town at the same time, before introducing Lady Gaga.

“…actually, Lady Gaga won’t be joining us because Tim Rogers has her tied up backstage, so we’ll get him out instead,” guitarist CC Adcock said as a suited up Rogers clambered on stage high-fiving and kissing the band.

They launched into Fats Domino’s I’m Walkin’, which Rogers sang on the band’s latest album Plays Fats. This was followed by an extended jam session where Rogers invoked his inner Robert Plant (who incidentally has also sung with the Lil Band) and sang Led Zeppelin’s Whole Lotta Love while the band played a psychedelic-tinged freakout version of Howlin’ Wolf’s Spoonful in the background.

Throughout the night the Lil Band had effortlessly jammed through a whole heap of New Orleans classics in a style that only could come from Louisiana: As tight as a chicken’s arsehole and as loose as a saddle on a dog. Despite the fairly ordinary sound of the beautiful venue and the fairly ordinary crowd (to which Tim Rogers had shouted “Come on you fuckin’ snobs!”), the gig was one to remember.

The Lil Band O’ Gold have two remaining shows on their Australian tour. Catch them tonight (Friday 29 June) at the Espy’s Gershwin Room and tomorrow night (Sat 30 June) at the Substation in Newport. Tickets can be found at Love Police.

Tagged as: Lil Band O Gold, Regal Ballroom, Tim Rogers, You Am I

Lafayette legends Lil’ Band O’ Gold have a Christmas gift for fans, a free download of ‘Santa’s Messin’ With The Kid’.

The Lil’ Band O’ Gold has kicked off their Australian tour in Sydney.

Roots star Xavier Rudd kicks off a mixed bag of albums this week with Usher, Hot Chip, The Hives, Diesel and more.

Louisiana supergroup Lil’ Band O’ Gold are the band everyone wants to jam with when they are in the same town.

Lil Band O’ Gold’s next album ‘Plays Fats’ has a crack line-up of guests including Robert Plant and Lucinda Williams as well as Australia’s Jimmy Barnes and Tim Rogers.