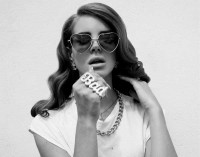 Two very different Lana Del Rey demos have emerged online. So are they actually hers?

The singer was recently spotted hanging out with Axl Rose in France, and her efforts on a new Kickdrums mixtape were leaked last week.

While her song with rapper A$AP Rocky, ‘Ridin’, was to appear on a mixtape for The Kickdrums, the act yanked it because the song was getting “too big too fast”, and said that it was actually destined for A$AP Rocky’s forthcoming album.

Following that leak, two more Lana Del Rey tracks have emerged online – both unreleased demos that show a very different side of the singer. So different, in fact, that we’ll remain skeptical that it’s actually her.

Anyway, sample a brief snippet of a song called ‘Ride Or Die’ and a tune called ‘Lift Your Eyes’ below.

Rapper A$AP Rocky is seeking a restraining order against a woman he claims has been making his life a living hell for the past two years.

Big Sean has revealed details of his fifth LP - his first solo record since 2017's 'I Decided' - which will see the star get real about being diagnosed with heart disease as a teenager and family.

A$AP Rocky has broken his silence following the guilty verdict in his Swedish assault case, telling fans he's "disappointed" with the outcome.

A$AP Rocky made a triumphant appearance on stage on Sunday night, following his release from a Swedish jail.

A$AP Rocky has confirmed he'll be making his first live appearance since his release from prison in Sweden at California's Real Street Festival on Sunday.

The man left seriously injured after a street fight with rapper A$AP Rocky has been identified as Mustafa Jafari.