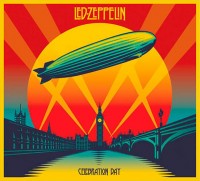 The surviving members of Led Zeppelin held a press conference this week in London to talk about their new concert movie ‘Celebration Day’.

Robert Plant, Jimmy Page and John Paul Jones talked about their memories of the last Led Zeppelin performance five-years ago to pay tribute to Atlantic Records who had signed Led Zeppelin to his label in 1968.

Jimmy Page said the first song ‘Good Times Bad Times’ was probably one of the last choices they could have made. John Paul Jones said they chose it because it was their very first song.

The band avoided answering questions about any more shows during the press conference and Robert Plant said that they don’t see each other very often.

‘Celebration Day’ will debut in cinemas mid October and be released on CD and DVD in November.

The tracklisting for Celebration Day is as follows:

The Rock and Roll Hall of Fame has another limp dick year with Whitney Houston chosen over Motorhead, Soundgarden, MC5 and Judas Priest.

Atlantic Records co-founder Ahmet Ertegun is exposed as an abusive, sexual harasser in a new book by his former secretary Dorothy Carvello.