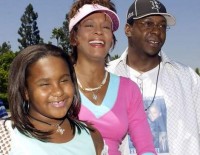 The 22-year-old daughter of late singer Whitney Houston and Bobby Brown died on July 26 after being in a coma for almost six months. Last night her family gathered for a wake, and today loved ones attended a service to celebrate her life.

The funeral was invitation only and closely guarded, with family members said to be concerned about photographs of the late star being leaked to press.

It took place at the Saint James United Methodist Church in Alpharetta, Georgia, with Bobby and singer Monica among the mourners.

Following days of speculation, Nick Gordon was not at the funeral. He was raised as Bobbi Kristina’s brother by Whitney, who wasn’t his biological mother, and then began a relationship with Bobbi Kristina. At one point the pair claimed to have married, but it was confirmed nuptials hadn’t taken place after she was found unresponsive in a bathtub at the end of January.

Nick has been accused of abuse in a lawsuit filed by those handling Bobbi Kristina’s affairs. He had written a letter asking her family to allow him to attend today’s service.

It has been reported that the funeral had a Sweet 16 theme, tanks to Bobbi Kristina’s aunt Pat Houston.

After the service, Bobbi Kristina’s body will be transported to New Jersey, where she will be buried next to Whitney in the Fairview Cemetery in Westfield. There will also be a memorial on Monday at the New Hope Baptist Church in Newark, which is where Whitney’s funeral took place following her death in February 2012.

Bobbi Kristina Brown's boyfriend has been ordered to pay her estate officials more than $36 million (£29 million) after he was found civilly liable for her death.

Nick Gordon is convinced the release of his girlfriend Bobbi Kristina Brown's autopsy report exonerates him of any wrongdoing.

Bobbi Kristina Brown Autopsy Report To Be Made Public

A Georgia judge has ordered Bobbi Kristina Brown's autopsy to be unsealed.

Nick Gordon's mother claims he is in shambles over the death of Bobbi Kristina Brown.

Bobbi Kristina had 'no significant injuries" an initial autopsy has revealed.

Bobby Brown has found the loss of his daughter Bobbi Kristina 'unimaginable'.