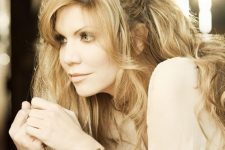 Alison Krauss is about to release her first solo album in eighteen years.

The album is her first purely solo set since 1999’s superb Forget About It. Since that time, she has put out three studio sets and one live album with her band, Union Station, and the universally acclaimed Raising Sand with Robert Plant.

The track list:
Losing You
It’s Goodbye And So Long
Windy City
I Never Cared For You
River In The Rain
Dream Of Me
Gentle On My Mind
All Alone Am I
Poison Love
You Don’t Know Me