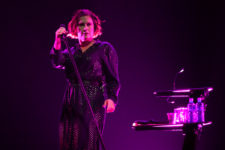 The former tennis champion turned religious zealot has been outspoken about her opinion of same sex marriage in Australia with nasty comments like homosexuality is a “lust for flesh” and that LGBT people are “all the devil”.

Court, who had Margaret Court Arena named in her honour for her tennis accomplishments, also now claims “tennis is full of lesbians”.

Alison Moyet, who performed at Margaret Court Arena on Saturday night, said this about the former tennis champion. “We are all children of the same wombs and we belong together. If Margaret Court believes God is the great architect then why is she saying he has failed?”