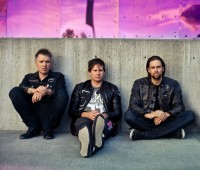 Created by Blink 182 guitarist Tom DeLonge while his first band was on hiatus, Angels & Airwaves grabbed a new legion of fans wooed by his emotional rock epics.

Tickets go on sale at 9am next Thursday 26 January from Ticketek for the licensed all ages Sydney show and Ticketmaster for the over-18 Melbourne show.

The White Stripes first ever greatest hits record ‘My Sister Thanks You and I Thank You: Greatest Hits’ on 4 December.

Linkin Park’s Hybrid Theory has been given a 20th anniversary make-over with a massive 5CD, 3DVD and 3LP box set release.

Peter Hook Is Up For A New Order Reunion

Peter Hook wants to sort out his "difficult" relationship with his former New Order bandmates by sitting down and listening to their seminal 1983 album Power, Corruption & Lies.

Something For Kate Announce Details Of First Album in Eight Years

Something for Kate will released ‘The Modern Medieval’, their first album in eight years in November.