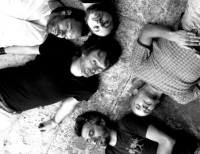 The dates, which will feature the full Atoms For Peace line up of Thom Yorke, Nigel Godrich, Joey Waronker, Mauro Refosco and Flea, include three nights at London’s Roundhouse venue on 24th, 25th and 26th July. These shows are in addition to the recently announced festival dates at the Pohoda Festival, Slovakia (12th July), Exit Festival, Serbia (13th July) and Melt Festival, Germany (21st July)

Presale tickets for all shows go on sale Wednesday 6th March at 9am (UK) from and then on general sale from Friday 8th March at 9am. Go to http://tickets.waste.uk.com for more details

Watch the new video for Atoms For Peace’s ‘Ingenue’.

Radiohead frontman to sue David Cameron if he decides to use any of his music in election broadcasts.