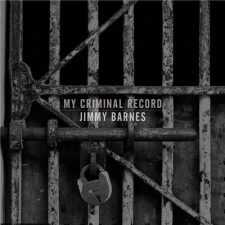 NEW CHART RECORD: Jimmy Barnes’ 17th solo studio album “My Criminal Record” debuts at the top of the ARIA Albums Chart this week, becoming his TWELFTH No.1 album, the most by a solo artist ever in Australia (local or overseas acts).

Jimmy’s tally of weeks at No.1 (as a solo artist) now climb to 34 weeks, placing him tenth on the list for ‘Accumulated Weeks at No.1: Albums; 1965 to 2019′, two weeks shy of Ed Sheeran’s 36 weeks total and two weeks ahead of both Delta Goodrem and Michael Buble (32 weeks apiece). BUT the big news is that Jimmy’s twelfth No.1 album makes him the second most in Australian Chart History behind the 14 No.1 albums by The Beatles, and pulling away from three-way tie he was stuck in with U2 and Madonna (who has a new album out next week, so she could be joining Jimmy’s 12 in two weeks time).

For this decade Jimmy has now logged three weeks at the top from three No.1 albums, placing him equal 22nd on the list for this decade alongside Bon Jovi, Bliss N’ Eso, Hillsong and 5SOS who have all had three weeks from 3 No.1 albums. This is the first time that the word ‘Criminal’ has appeared in a No.1 album title, but the fourth to feature the word ‘Record’, the last one being the Human Nature set “Reach Out: The Motown Record” (from 19-Dec, 2005), plus the eleventh “My” to hit the No.1 spot.

This new No.1 album is now the 232nd by an Australian Act to hit the top (solo, duo or group) and the fourth by an Aussie for this year after Hilltop Hoods (March), Dean Lewis (April) and most recently Conrad Sewell (27th of May), while for Solo Male Artists this is the 238th (local or overseas) to hit No.1. In the tally of weeks at No.1 for Solo Australian Male acts, Jimmy is second behind John Farnham’s 52 accumulated weeks (from 10 #1’s) and he sits well ahead of third placed at 19 weeks, The Twelfth Man. Also Jimmy does come out on top of the ‘#1 Albums Tally’ if you add the four #1’s he appeared on as the lead singer for Cold Chisel (1981, 1982, 1984 and 1998), giving him sixteen No.1 albums all up in Australia.

Last week saw the return to the top for Billie Eilish and her debut album “When We All Fall Asleep, Where Do We Go”, which dips a spot here to No.2, and might not return to No.1 in the next few weeks as there were new albums by Avicii, Santana and Jonas Brothers issued on Friday, while the following week there are new sets out for both Bruce Springsteen and Madonna. Billie Eilish remains for a seventh week at No.1 in New Zealand and regains the top spot in America for a third overall week at No.1 there.

Logging it’s one-year anniversary of charting (52 weeks; it entered initially mid-November of 2017) is Elton John’s “Diamonds” collection, which jumps up five places to a new peak of No.3, which is his highest charting best of set since he hit No.1 in January of 1991 with his “Very Best of” set for a single week, and is also his highest charting set since the follow-up set to that collection in “The One” (HP-2 for two weeks from 29th of June, 1992). Elton’s songs and one or two of his vocals are also on the stable No.6 debut from last week in his biopic set “Rocketman”, while the other Top 10 debuting soundtrack from last week in “Aladdin” drops down three spots to land at No.7.

Pink’s “Hurts 2B Human” set drops down two spots to No.4, and the album that knocked if off of the top spot in “LIFE” for Conrad Sewell falls down five places this week to No.8. Khalid’s “Free Spirit” set is down two places to No.9.

The second of three new entries to the Top 10 occurs at No.5 in the first best of set for Susan Boyle called “Ten”, which features 13 of her previously released songs along with four new covers of “A Million Dreams”, “Stand by Me”, “500 Miles” and “Climb Every Mountain”. This becomes her eighth albums chart entry and also her fifth Top 10 placing and her first to make it into the ten since 2012’s “Standing Ovation” hit No.6, while the album title refers to the ten years since her first release. The third and final Top 10 debut is in at No.10 and is the second issued EP for Miley Cyrus called “She is Coming”, which features six tracks including this weeks new singles chart entry at No.25 called “Mother’s Daughter”, with the new set features guests such as RuPaul, Ghostface Killah, Swae Lee and Mike Will Made it, and this is now her sixth Top 10 appearance in Australia.

UP:
* With a new entry this weeks to the singles chart at No.65 called “Press”, the Cardi B album “Invasion of Privacy” jumps back up thirteen places to land at No.38, even though the new song is NOT on the older album.
* The first and highest returning album this week is Jess Glynne’s “Always in Between” at No.44, followed further down by Jack River and “Sugar Mountain” (she is touring nationally at the moment, returns at #72), “Only Human” for Calum Scott (#79) and ‘Guardians Vol.2′ soundtrack (#98).
* Shawn Mendes’ self-titled fourth album rebounds nine spots to No.52.
* The INXS “Very Best” rises back up eleven places to No.53, with other rising collections being for Queen (Platinum Collection 66 to 59), The Wiggles (75 to 71), The Killers (100 to 75) and Missy Higgins (returns at No.89).
* Adele’s “21” rebounds nine places to No.78.
* Rufus du Sol jump back up eleven places to No.81 with their third album “Solace”.

DOWN:
* The three albums leaving the Top 10 this week are “Igor” for Tyler, the Creator (HP-3, WI10-2) down six to No.11, “A Place We Knew” by Dean Lewis (HP-1×1, WI10-10) dropping three spots to No.13 and DJ Khaled’s “Father of Asahd” (HP-7, WI10-2) falling sixteen spots to No.25.
* Lewis Capaldi holds for a third week at the top in England this week with his debut album “Divinely Uninspired to a Hellish Extent”, while here the set drops down eight places to No.22.
* Hilltop Hoods leave the Top 20 for the first time with “The Great Expanse” after fifteen weeks of charting, with the set down seven places to No.26.
* The self-titled Rammstein album falls ten places to No.28.
* After peaking at No.23 last week the Ten Tenors set “Love is in the Air” falls this week six spots to No.29.
* The Seekers’ “Farewell” set falls seven places to No.33.
* Last weeks only outside-Top10 debut to survive for a second week is the YG fourth album “4Real 4Real”, which drops down eleven places to No.36 and sees a new entry in “Go Loko” enter at No.46.
* Eminem’s “Kamikaze” albums drops down six places to No.42, while his collection “Curtain Call: The Hits” falls thirteen places to No.46, with further falling best of sets being for Maroon 5 (45 to 50 in its second year of charting at 104 weeks), Bon Jovi (72 to 80), Foo Fighters (78 to 90), Red Hot Chili Peppers (68 to 91) and Green Day (71 to 92).
* The National falls seventeen spots to No.45 with “I Am Easy to Find”.
* ScHoolboy Q and his set “Crash Talk” plummets twenty-five chart-rungs this week to No.63.
* Hillsong United sees their “People” album drop down nineteen spots to No.65.
* Both entries for Juice WRLD drop down eight places each this week in his newer album “Death Race for Love” (58 to 66), and his debut set “Goodbye and Good Riddance” (76 to 84).
* Ziggy Alberts rose back up to No.50 last week with his “Laps Around the Sun” album, which this week drops nineteen places to No.69.
* The 2019 Eurovision album for Tel Aviv, Israel plummets forty-three spots to land at No.77.
* Maggie Rogers’ tour is now over, and her album “Heard it in a Past Life” regresses twenty places to No.83 this week.
* Logic’s “Confessions of a Dangerous Mind” tumbles down thirty-seven spots to No.86.
* Beyoncé and her “Lemonade” album falls sixteen places to No.93.
* The compilation “The Greatest Showman: Reimagined” dips down twelve spots to No.94.
* The Vampire Weekend album “Father of the Bride” is also down twelve places to No.95.
* Clean Bandit’s 25 week run for “What is Love?” could be over next week as the set drops down twelve places this week to the end of the chart at #100.
* Two of last weeks Top 50 entries leave the entire chart this week in the self-titled set for Amyl and the Sniffers (#22) and the Middle Kids EP “New Songs for Old Problems” (#44), while other new entries from last week to leave are also “Flamagra” for Flying Lotus (#55) and “Escape from New York” for Beast Coast (#95).

FURTHER NEW ENTRIES:
* #15 (LP#5) – Ignorance is Bliss by Skepta is the fifth album for the English MC from Tottenham, who now has two entries and Top 20 placings, as his fourth set “Konnichiwa” debuted and peaked at No.13 in mid-May of 2016.

* #18 (LP#4) – Zuu by Denzel Curry is the fourth issued and now second charted album for the American rapper, who in early August of 2018 debuted and peaked at No.27 with his third set “TA13OO” (Taboo), so with this album entering within the Top 20 this now becomes his highest charted set here.

* #76 (EP#1) – 2WayMirror (EP) by Gabbie Hanna is the debut release and first EP for the American internet personality who also has a streaming service on Vine and a popular YouTube channel, with this set containing her previously issued singles “Medicate” and “Butterflies” (both 2019).

* #96 (LP#1) – Barriers by Frank Iero & the Future Violents is the lead singer of My Chemical Romance’s sixth album away from the band, but the first with his the band The Future Violents, having previously issued the sets “Stomachaches” (2014 as frnkiero and the cellabration), “Parachutes” (2016) and “Keep the Coffins Coming (EP) (2017, both as Frank Iero & the Patience), plus “Heartbreak in Stereo” (2001 with Pencey Prep) and “No Country for Old Musicians” (2013 as Reggie & the Full Effect).