Australian Charts: Midnight Oil Debut At No 1 With The Makarrata Project' - Noise11.com 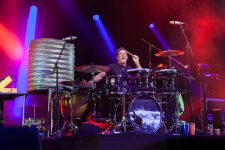 Australian Charts: Midnight Oil Debut At No 1 With The Makarrata Project’

Midnight Oil return to the top of the ARIA Albums Chart with their new set “The Makarrata Project”, their first No.1 album in just over 23 years.

Midnight Oil first hit No.1 during this chart week 36 years ago with their fifth album “Red Sails in the Sunset” (4 weeks from 5th of Nov., 1984) and then they also hit the top with their next two successive studio albums “Diesel and Dust” (6 weeks from August 24th, 1987) and then “Blue Sky Mining” (2 weeks from March 11th, 1990), while their last No.1 set was with their first best of collection “20,000 Watt RSL” (1 week on 26th of October, 1997; 23 years and two weeks ago), and with this new fifth No.1 album they rack up their 14th overall week at No.1 locally, moving them up the list for ‘Accumulated Weeks at No.1: Albums’ from 50th to now equal 45th alongside Crowded House (14 weeks from 5 #1’s), while last weeks No.1 album gave Bruce Springsteen his fifth overall No.1, the same occurs this week for The Oils, placing them alongside other Aussie acts with five No.1’s like Cold Chisel, Powderfinger, Kasey Chambers, Olivia Newton-John and AC/DC (which could change in two weeks time with their new album being issued).

This new No.1 album is the first with the word ‘Makarrata’ (it’s a Yolngu word “describing a process of conflict resolution, peacemaking and justice”, or “a coming together after a struggle”) in its title, but the second No.1 appearance for the word ‘Project’, as Ed Sheeran’s last album “The No.6 Collaborations Project” (July 2019, 5 weeks) was the only other album with that word in its title. This new No.1 album becomes the twelfth by an Australian Act for 2020 (of which two or three more could land #1 albums this year) and the 248th all up (since the first in 1968 by The Seekers), while the album is also the 398th by a Group (local or overseas) and the 17th for 2020 for a group.

There are six new entries and seven overall entries to the Top 10 this week, and coming in at No.2 is the new English and N.Z. No.1 album, the sixth set for Ariana Grande called “Positions”, becoming her first non-chart-topper in Australia since her debut set peaked at No.6 here, as her past four albums all claimed the top spot in Oz, while nine of the 14 tracks from the new album are within the Top 50 Singles chart this week, with the albums title track logging a second week at No.1 on the singles chart too.

This is followed by a third studio album for Sam Smith called “Love Goes”, which features the current Top 40 entry “Diamonds” (TW-33) and it becomes their third Top 3 album locally, as their first set “In the Lonely Hour” made it to No.1, followed by “The Thrill of it All” which peaked at No.2, now this third album makes it to No.3 (is there a pattern forming maybe?). The only two albums to survive within the Top 10 this week are “Letter to You” by Bruce Springsteen, which is down three spots to No.4 and the Guy Sebastian set “T.R.U.T.H.”, which is down two places to No.5.

All of the new entries to the chart occur within the Top 10 this week, and new at No.6 is the fourth studio album and first new release in over 21 years for American band Mr. Bungle called “The Raging Wrath of the Easter Bunny Demo” which is a re-recording of their self-released 1986 demo tape, issued for the first time and re-recorded by the band members. The band have only ever charted one album here previously, their second set “Disco Volante” which made it to No.40 in early November of 1995, so this now becomes their second chart entry and first Top 10 berth here.

This is followed at No.7 by the fourth EP for English rock band Bring Me the Horizon called “Post Human: Survival Horror” (although it has nine tracks, the band still class it as an EP), and it now becomes their sixth albums chart entry here and fifth Top 10 placing, as their past four studio albums from 2010 to 2019 all went to No.1 in Australia, their last being “Amo” on the 4th of February, 2019.

Then we have three further Australian acts entering the chart this week, starting at No.8 with the debut album for Sydney hip-hop/rap act Triple One called “Panic Force”, which becomes their first chart entry. After which local female singer Kate Miller-Heidke sees her fifth studio album “Child in Reverse” come in at No.9, becoming her fourth Top 10 album in Australia and her first new material since March 2014’s “O Vertigo!” (HP-4), although she did represent Australia at Eurovision last year and came second in The Masked Singer this year, while overall this is her ninth album chart entry (5 studio, 2 live, 1 best of, 1 collaboration). Returning to the chart at No.10 for a third overall week within the Top 100 and a second week within the Top 10 is the latest Troye Sivan release “In a Dream” (HP-3, late August 2020), which re-enters at No.10 thanks to its physical release last week.

NO FURTHER NEW ENTRIES this week.
Written, Compiled and Researched by Gavin Ryan.