Billy Bragg To Play One Show Only In Sydney - Noise11.com 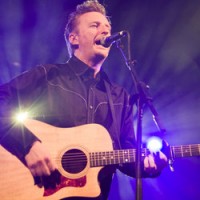 Billy Bragg To Play One Show Only In Sydney

Singer songwriter Billy Bragg will perform one show in Sydney in September.

Bragg is heading to Australia next month to be the keynote speaker for the BIGSOUND music conference in Brisbane. This Sydney show will be his only Australian live performance while he is in Australia.

Bragg’s most recent album is the Joe Henry produced ‘Tooth & Nail’ which came after five years of studio inactivity. “I didn’t tell anyone I was in the studio,” says BRAGG, who took up the casual offer of Grammy-winning producer Joe Henry to record in his Pasadena basement. “Don’t even bring your guitar,” Henry told BRAGG, “just some songs and a change of underwear.”

Bragg says ‘Tooth & Nail’ is the rightful successor to ‘Mermaid Avenue’. He calls it “the Mermaid Avenue I never made”.

Moving to 100% virtual and 100% free this year, BIGSOUND 2020 gets ready to go live in your living rooms, laptop screens, and office spaces from tomorrow on Wednesday October 21st and Thursday 22nd, bringing together a stacked conference program of keynote presentations, panels, workshops, performances and parties covering a wide range of topics and discussions aiming to re-future a challenged industry with positivity, connection and reality.

BIGSOUND 2020 has dropped the mic on its first (and hopefully last) ever 100% virtual program on October 21 and 22, bringing together a stacked first announcement of keynote presenters to lead a program to re-future a challenged industry with positivity, connection and reality.

ANNOUNCEMENT: BigSound To Go Ahead For 2020

BIGSOUND is pleased to announce that it will proceed in 2020 with a revised program of conference, live music and parties, ensuring that its long-standing role of providing forward thinking, listening, learning, discovering and most importantly industry connection for the music community, is not lost due to COVID-19.

Andy King, the less repulsive character we met in the Netflix documentary ‘Fyre: The Greatest Party That Never Happened’ will speak at the BigSound music conference in Brisbane.

Laura Imbruglia has a new song ‘Give Boys Pink Toys’

Brisbane’s Bigsound will kick off 3 September for three days. Here’s a list of who you can see for 2019:

Australian songwriting legend Paul Kelly has been announced as a keynote speaker for Bigsound 2018.