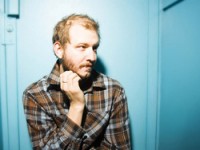 The album debuted at number two on the Australian charts when it was released in June, and the critical-acclaim continues to flow.

They’re not ‘video clips’ so much as a “visual extension of the music.” A press release notes: “…these visual accompaniments are striking in their distinctive atmosphere, and compelling works in their own right”.

The Deluxe Edition will be on iTunes only, from Tuesday 29 November, but a thousand lucky punters who buy the physical album at participating stores will get a DVD of the films.

For a sample, check out the trailer below.

Radiohead guitarist Ed O'Brien has revealed Brasil - a solo piece under the name EOB - to accompany a nine-minute short film.

Back in 2009, Gary Moore played an intimate gig to a few hundred fans in London. Now that show is finally going to see the light of day.

With the Christmas season over, it allows regular albums to reclaim the charts, and this week the self-titled fifth album for Beyonce climbs back up two places to give her the first ARIA No.1 album of her career.

New U2 Coming Sooner Or Later

A new U2 album could be with or without you in 2013, then again maybe not. Bono says the band has been working on a follow-up to 2009’s ‘No Line On The Horizon’ but doesn’t care if it takes 10 years to produce.