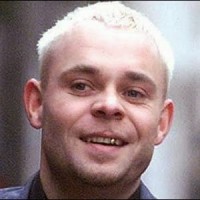 Brian Harvey, a member of the extremely successful British boy band East 17, has posted a YouTube video showing him in an alley smashing a display of gold records he received during his music career.

Harvey was a member of the band from 1991 to 2010 during a time when they scored twelve top ten British hits, including the number 1 hit Stay Another Day. He was diagnosed with clinical depression in 2005 and has had some money problems in the last few years.

For the last year, Harvey has been looking into child abuse claims related to the recent spate of abuse arrests in the entertainment industry and had recently met with MP Simon Danczuk to discuss his findings. Danczuk indicated to Buzzfeed that “The reason we were meeting up is to discuss some work he’s done around child sex abuse. He was sharing the information that he had gathered.”

Why Harvey chose to destroy his record awards is unknown but the caption to the video, “This is what i think of you all. Fuck your record industry, and fuck your weird pedophile world. Fuck you.”, may be in relation to ongoing speculation about child and youth abuse within the record business.

He later posted a second short video of him cleaning up the alley, blaming it on his O.C.D.

Three days later, he posted two additional videos, one showing binders of information that was supposedly “kept out of the Old Bailey trial” and a second with a lengthy message about Operation Fernbridge, the child sex abuse investigation.

Since i spoke with Andrew Ash, Operation Fernbridge’s TOP WITNESS, I will NEVER view life, and this world in the same way ever again. It has truly pushed my anger over the edge. I will say what i see, and this is not who we are, and all corruption, in all areas of our society needs to be exposed, and got rid of. I don’t know what you need to see, or hear to make you angry, but i have seen and heard enough, and when you know what i know, i hope you realise enough to want to change things. I will be criticised, ridiculed, but the truth is still the truth, even in a minority of one, this must be done, and its now begun.

Former East 17 singer Brian Harvey says he is now homeless after being removed from a Benefits Office in the UK for abusive behaviour.

The East 17 reunion has failed miserably with just 30 fans turning up for a show that would hold 833 in Dublin.