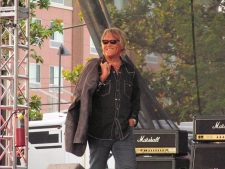 Brian Howe, Bad Company’s singer from 1986 to 1994, has died in Florida from heart failure.

Howe came to Bad Company via Ted Nugent who used him as lead singer on his ‘Penetrator’ album. He also fronted Nugent’s band for a world tour.

Brian also worked at one point with Megadeth, co-writing the song ‘I’ll Get Even’ from the 1997 album ‘Cryptic Writings’.