Grammy.com Has Some fun With Noise11 - Noise11.com 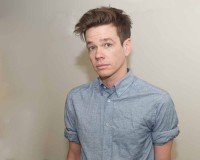 Grammy.com Has Some fun With Noise11

The latest Word Up From Down Under feature at Grammy.com is with New York band fun.

‘We Are Young’ was a massive hit for fun generating more than 5 million sales in the USA alone. It is currently the second top-selling song of 2012 in America.

fun’s ‘Some Nights’ album reached number 3 in America and sent them up the charts all over the world. That then lead to a world tour, a trip to Australia and a chat with Noise11.com when they reached Melbourne.

Jack Antonoff Is Hanging With Lorde In New Zealand

Rocker Jack Antonoff has escaped to New Zealand to hang out with his pop collaborator Lorde following his split from actress Lena Dunham.

Nate Ruess of fun. will release his debut solo album in June even though his band have only released two albums.

Beck's sheet music album 'Song Reader' is finally going to be heard ... but not from Beck.

No fun At All, Cancel Show With Mumford & Sons

fun have been taken out of action due to a vocal issue for singer Nate Ruess.

Neil Young has announced the reformation of Crosby, Stills, Nash & Young for his Bridge School Benefit in October.

Paul McCartney will join the massive two-day line-up for the iHeartRADIO Music Festival in Las Vegas in September.

Ryan Seacrest announced the lineup for this year's iHeart Music Festival on all Clear Channel radio stations Monday morning with a lineup heavy on big names from all genres and including a special appearance by Queen with Adam Lambert.