Klaxons Have A New Single - Noise11.com 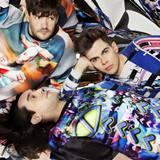 Klaxons Have A New Single

Klaxons have announced details of a new single, ‘There Is No Other Time’, ahead of their forthcoming album.

And what an opening to the year it is – not only is it classic Klaxons at their best, it’s also a collaboration with one of the most exciting dance-pop duos making some serious waves already this year ‘ Gorgon City, who’s current single ‘Ready For Your Love’ feat MNEK’ entered the UK single charts at #4 on Sunday.

The track is live on the bands SoundCloud.

‘There Is No Other Time’ and the subsequent new album marks the return of Klaxons since ‘Surfing the Void’ (2010), which in turn was the follow up to their Mercury Music Prize winning debut album ‘Myths of the Near Future’ in 2007.

The new album also sees the band work with Tom Rowlands of the Chemical Brothers, Erol Alkan and James Murphy.

Further news of the new album & live shows for 2014 to follow.

Chemical Brothers have a video for 'Sometimes I Feel So Deserted'.

Chemical Brothers Set For A UK No 1 Debut

Chemical Brothers have returned with their eighth studio album, 'Born In The Echoes' and it is looking like debuting at no 1 in the UK.

If numbers hold, the Chemical Brothers will be at number 1 this week on the U.K. Albums chart.

The Chemical Brothers will release Born in the Echoes, the eighth studio album of their twenty year career, with appearances from Beck and St. Vincent.

84 people were arrested for drugs at the Summadayze music festival in Melbourne yesterday. (January 1, 2013).

The Summadayze 2013 line-up has been revealed with The Chemical Brother and Mark Ronson doing DJ sets and a performance from M.I.A. leading the line-up.