Madonna To Express Herself In A Movie About Madonna - Noise11.com 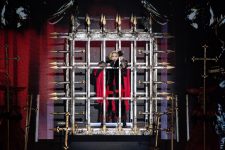 Madonna performs at Rod Laver Arena on Saturday 12 March 2016. This is the first show of the Australian leg of her world wide Rebel Heart Tour.

Madonna To Express Herself In A Movie About Madonna

Madonna has picked a topic she loves, Madonna, to make a movie about.

Madonna has announced that she will direct her own biopic. No doubt it will have all the accuracies of Elton John or Queen’s casting of the eye over their theatrical fiction.

As we saw with both Elton and Queen, they never let the truth get in the way of a good story. Both Elton’s ‘Rocketman’ and Queen’s ‘Bohemian Rhapsody’ went from white lie to complete bullshit with both rewriting history along the way.

She had the documentary ‘Truth or Dare’ / ‘In Bed With Madonna’ in the early 90s.

Madonna has also starred in the movies ‘Die Another Day’, ‘Swept Away’, ‘The Next Best Thing’, ‘Evita’, ‘Who’s That Girl’, ‘Shanghai Express’, ‘Desperately Seeking Susan’, ‘Vision Quest’ and ‘Dick Tracy’.