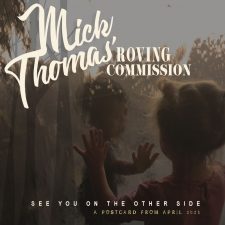 When Mick Thomas gathered his Roving Commission for the “lockdown” album ‘See You On The Other Side’ he created one song from the perspective of being served retro football matches on television while the current season was put on hold.

“It’s a footy song. Basically, the first weekend after the footy was cancelled by force of habit I flicked on the tele on Friday night on the off chance they decided to play a match somewhere,” Mick tells Noise11.com. “I flicked it on and they were playing classic matches.

The song is about how memories are attached to time. “I yelled out to my wife who was also a Saints supporter “hey round 14, 2009”. We started talking about it. For us it was a time just before we had our child. It’s funny how people have different happenings focusing your life on what you were doing when, say with lockdown, a football match or whatever. I was trying to look at a relationship in terms of your footy team. It’s a simple song. That’s the way you focus your life”.

‘See You On The Other Side’ is a long overdue return to recording for Mick Thomas. He was due to begin work on a new studio album but that was postponed when the band was grounded during lockdown. Instead, this album features all new songs, mostly written and recorded in April and released in June.

Mick Thomas launched the album with a virtually streamed event from Memo Music Hall this past weekend.

Tagged as: 80s, Australia, folk, Mick Thomas, roots, Roving Commission, See You On The Other Side, Weddings Parties Anything