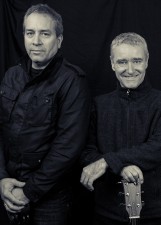 Boom Crash Opera will take to the road for the first time with new singer Andrew De Silva in June.

Boom Crash Opera had to decide if they would continue after Ryder left. “We struggled with the idea, but the impetus to go on and still be a recording artist, was stronger than merely being a heritage act (not that there’s anything wrong with that)” Maz said. “We approached a few singers with an ‘expression of interest’ and Andy was keen and fitted the mould”.

De Silva was an original member of CDB and generated a string of hits in the 90s including ‘Hook Me Up’, ‘Hey Girl’, ‘Lets Groove’, ‘Don’t Stop’ and ‘Good Times’.

Boom Crash Opera where one of Australia’s most successful acts in the 80s and 90s with hits like ‘Great Wall’, ‘Hands Up In The Air’, ‘Her Charity’, ‘Onion Skin’, ‘Get Out Of The House’, ‘Dancing In The Storm’, ‘Talk About It’ and ‘Gimme’.

Melbourne maestro, Music Director John Foreman will pair some of the Australia’s greatest vocalists with a 30-piece orchestra to perform the music of George Michael in October for ‘George Michael: Listen To Your Heart’.

Andrew De Silva is out to take the “hardest working man in showbiz” award in coming months. He will tour with his band CDB for their own shows and with Keith Sweat, he has his Prince tribute shows and he will also be out with Boom Crash Opera.

Boom Crash Opera will set out for their first tour with new singer Andrew De Silva starting Friday in Albury.