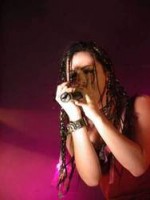 New Evanescence drummer Will Hunt tells Noise11 about the line-up changes and meeting their excitable fanbase.

Will Hunt, who has previously drummed for Staind, Tommy Lee, Black Label Society and more, signed on with the revitalized goth-rock megastars Evanescence.

“It was one of those unspoken things, we just gelled,” he tells Noise11 of joining the band, “There’s definitely a chemistry there. It’s not something you can try to create, it’s just there.”

Of course, the line-up changes in the band has been an ongoing source of frustration within Evanescence across the years and through the gap between albums.

Hunt says he can’t really speak for what happened before he arrived, but he notes, “In any situation, two-way marriages don’t work a lot of the time, then throw in a five-way marriage and sometimes it’s really hard. Sometimes people have different goals, different motives, different reasons for doing what they’re doing.”

“I think [frontwoman] Amy [Lee] was working towards getting to a place with the band where she could do what she just did with us – get in a room, as a band, as an old-school band like what Led Zeppelin or Motley Crue would do – and write a record this time.”

And there was nothing Amy or longtime guitarist Terry Balsamo could do to prepare him for how committed Evanescence’s fanbase is.

“When we went to Russia, and we’ve gone to places in Europe particularly, which was Troy and I’s first run, I wasn’t prepared for the amount of people and how rabid they were,” he chuckles.

“I tell you what, man,” he insists, “In all the band’s that I’ve played in, there are two band’s fans that really stick out as the most loyal and rabid, and it’s Evanescence and Black Label [Society]. And Black Label’s fans are one way but Evanescence fans are just as into it, just as loyal, just rabid, man, it’s crazy. We love ‘em, and they love us back ten-fold.”

Hunt goes on to talk about their performance at the Nobel Prize ceremony, performing on Late Night shows, the making of their new self-titled album and what Australian fans can expect during their forthcoming stadium tour.

Check out the whole interview below, as well as the dates for their first Australian tour in five years.