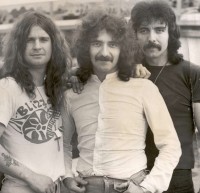 It was simply amazing! I have to admit I had low expectations especially of Ozzy and his vocal abilities. But they were super tight and he nailed it, a great frontman even now in his 60s.

We found out that he had to have the lyrics on a monitor in front of him which is hardly surprising given how much he has abused his brain over the years! So he didn’t move around much but it hardly mattered.

Tony Iommi looked super cool in his leather trenchcoat and didn’t move much – as is his custom – just delivered the goods without a mistake in sight. Several times the crowd cheered his name, willing him to get better. Geezer Butler was sensational and it made me realise how important his bass sound is to Sabbath.

The setlist was very well chosen with a mix of hits and album tracks. I was surprised that they played for example ‘Wizard’ – complete with Ozzy on Harmonica (didn’t even know it was him who played it!).

The crowd lapped it up as you would expect. Ozzy lapsed between American and Brummy accents which was hilarious. The drummer Tommy Cluefetos is a young guy who is Ozzys drummer and he NAILED IT. (Founding member Bill Ward withdrew from the reunion after internal bickering with the band).

Highlights for me were NIB and Black Sabbath, with of course Paranoid as a closer nailing it.

Could not have enjoyed it more to be honest… and I get to see em at Download festival in a few weeks time!

We had backstage passes but instead went straight to our Hotel bar to talk it out and of course get drunk :)

Former Black Sabbath drummer Bill Ward has been hospitalized to deal with heart problems which has caused him to cancel all of the upcoming dates for his new band, Day of Errors.

Bill Ward Has A New Band Day Of Errors

Bill Ward, the original drummer with Black Sabbath, has announced the formation of a new band.

Bill Ward is placing the blame on the media over his comment that Black Sabbath's album 13 was a "piece of shit".

Bill Ward has no love for Black Sabbath's latest album, 13.

Ozzy Osbourne has responded to a public statement by former Black Sabbath drummer saying he needs to fix the division in Black Sabbath.

The one downside of the Black Sabbath reunion that has occurred the last couple of years is that only 3/4 of the original lineup is participating, Ozzy Osbourne, Tony Iommi and Geezer Butler. Drummer Bill Ward has been absent due to conflicts with the Sabbath organization.

Tony Iommi of Black Sabbath has sent his former drummer Bill Ward his best wishes after learning that Ward had undergone a major operation.