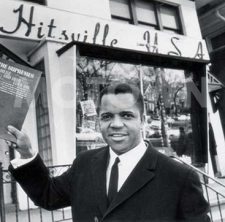 Sunset Boulevard and Argyle Avenue in Hollywood will hereby be known as Berry Gordy Square.

Motown legends Smokey Robinson and Stevie Wonder attended the dedication of the square to the founder of Motown Records, Berry Gordy.

Gordy, who turns 90 this week, said at the ceremony “As a kid growing up on the eastside of Detroit, Hollywood was an unattainable, mystical fantasy. But as Motown grew, our success made me realize that there was no limit to how far we could go. I wanted my artists to reach their full potential, so we came here to Hollywood.”

Berry Gordy started Motown Records (then called Tamla Records) in 1959 in his house using family money of $800. His first release was ‘Come To Me’ by Marv Johnson.

Smokey Robinson and the Miracles gave the label its first million seller with ‘Shop Around’.

In the 60s Motown launched the careers of Diana Ross, The Jackson 5, Stevie Wonder, Marvin Gaye, The Temptations, Gladys Knight and The Four Tops.