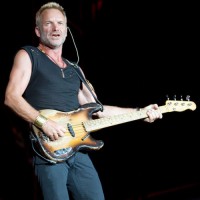 Sting has announced the release of his forthcoming duets album by performing with Brooklyn rapper Gashi during his virtual appearance on The Tonight Show Starring Jimmy Fallon on Friday.

While further details of the LP remain under wraps, Sting revealed it includes some of his previous duets as well as newly recorded songs, with artists like Melody Gardot, who recently teamed with him for her new single Little Something, and Gashi.

“Over the years, I’ve recorded many, many duets with some amazing people – Herbie Hancock, Eric Clapton – so we just put them all together and said, ‘You know, we should put this out’,” Sting shared.

“They sound pretty good, so it’s gonna be a Christmas surprise,” he smiled, before discussing his unlikely collaboration with Gashi.

“Apparently, he was influenced by my singing, my music, a lot,” explained the Message in a Bottle hitmaker.

“He’s written a song about his relationship with his mama. He played me the song and I thought it was a hit – what do I know? – so I said I’d love to be on it if he wanted it,” he enthused.

“So I guested on the song and we made a video together,” Sting commented, noting, “but we haven’t actually met as yet.”

A release date for the forthcoming record has yet to be confirmed.