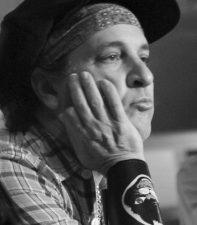 Sylvain Sylvain has announced the reason for his low profile over the past 12 months is because he is battling cancer.

In a post this week, the New York Dolls guitarist says he is undergoing his third operation this week. “I will be having a Neobladder reconstruction. I am optimistic about the surgery but will continue to need your love and support through my recovery which, realistically, will take about a year,” he said.

First, let me thank you all from the bottom of my HEART for your love and support. It brings such help and relief to me and my family. All of your beautiful thoughts, pictures and messages are breathtaking and full of LIFE/LUV. It strengthens me greatly.

I will be bringing your positive energy with me to the hospital tomorrow when I go for my third surgical procedure to remove the cancer that has invaded me.

I will be having a Neobladder reconstruction. I am optimistic about the surgery but will continue to need your love and support through my recovery which, realistically, will take about a year.

I know some of you would like to see or speak to me but that will not be possible for awhile. I ask you to please respect my privacy so, for now, just continue to think of me.

Please support my GoFundMe page if you haven’t already.
I am grateful for each and everyone of you for your LUV and support.

Sylvain Sylvain started the initial stages of the New York Dolls with his school friend Billy Murcia in 1967. They were called The Fox then. The name New York Dolls came when Sylvain was working in a men’s clothing store across the road from the New York Doll Hospital, a doll repair shop on Lexington Avenue.

They changed their name to New York Dolls in 1971 when David Johansen joined the band. The group lasted until December 30, 1976.

In 2004, bigtime fan Morrissey drove a reunion for the Meltdown Festival in London. The band played several UK festivals that year. In 2005, they entered the studio for their first album in 32 years ‘One Day It Will Please Us to Remember Even This’. Three albums were released out of this reunion, the last in 2011. In 2016 it was announced they were over for good.

The documentary All Dolled Up tells the early story.