The Beasts are Still Here to honour the Beast of Bourbon - Noise11.com 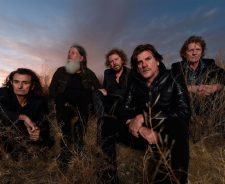 The Beasts are Still Here to honour the Beast of Bourbon

Without Spencer P. Jones and Brian Henry Hooper there is no more Beasts of Bourbon but in their honour there is The Beasts.

Founding members Tex Perkins, Kim Salmon and Boris Sujdovic together with longtime members Tony Pola (since 1990) and Charlie Owen (since 1996) have taken to the studio to record one more album ‘Still Here’.

Brian Hooper’s illness kept him from the sessions and Spencer P. Jones only made it in for one song. The music world now mourns their loss. Brian’s song ‘What The Hell Was I Thinking’ is included on the new record. There are also covers of Frank Zappa’s ‘The Torture Never Stops’ and Warren Zevon’s ‘My Shit’s Fucked Up’.

Check out the album preview with the single ‘On My Back’.

‘Still Here’ will be released on 15 February, 2019 then The Beasts will hit the road for Premier Artists.

Performing tracks from the new album ‘Still Here’ and the Beasts Of Bourbon classics.
With Special Guests