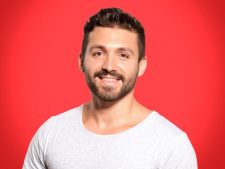 ‘Cruel’ was released on Monday so it only had four days of sales but unlike every other song in the chart, it had the advantage if being showcased to over one million Australian’s on television the night before it was released. It was sitting at no. 139 on the iTunes chart late Saturday afternoon indicating an even worse week is on the way next week.

‘Cruel’ was in downward spiral mode from the moment it was released, failing to go higher than no 24 on the real time iTunes chart even two days after it was heard by 1.2 million television viewers on The Voice finale last Sunday.

Alfie still did okay for himself winning a car and $100,000 cash but the recording contract handcuffing him to Universal Music might as well be treated as a prison sentence.

Arcuri’s career will now go in a direction decided by the label as the result of some cleverly worded clauses in his reality TV show contract. Alfie will be tied to the label for the duration of the contract making it difficult for him to set his own musical path.

‘Cruel’ was a sausage factory conveyor belt production written the a team of J.R. Rotem (Gwen Stefani), Lindy Robbins (Jason Derulo), Sermstyle (Flo-Rida), JHart (Justin Bieber) and Xplicit (Fifth Harmony) with no clear artist in mind. The song is the equivalent of a mass produced Big Mac bought through a drive-thru.

The exercise once again serves as a warning to wanna-be pop stars who decide the easy path via a reality TV show. The sweet taste of a quick injection of fame is quickly smothered by the harsh reality of the industry when the TV cameras are switched off.

An album is to follow, that was part of the deal. Good luck with that.

Australian Albums: Suicide Squad Beats Bernard Fanning For No 1 But Amity Affliction Is Coming For Both

‘Suicide Squad’ was the big album in Australia this weekend victorious over Bernard Fanning’s ‘Civil Dusk’ but next weeks chart will belong to The Amity Affliction.

The high profile release of the ‘Suicide Squad’ movie has pushed the soundtrack album ahead of the new Bernard Fanning solo album ‘Civil Dusk’ in first day sales.

‘Cruel’, the winning song by The Voice Australia winner Alfie Arcuri, has tumbled down the chart with second week sales of less than 500.

Alfie Arcuri ‘Cruel’ Is Already Out Of The Top 200

The Voice Australia winner Alfie Arcuri’s ‘Cruel’ has dropped out of the Top 200 less than two weeks after being showcased to 1.2 million television viewers.

The Voice Australia winner Alfie Arcuri’s song ‘Cruel’ has been totally ignored by the Australian public.

2016 The Voice Australia winner Alfie Arcuri’s song ‘Cruel’ has fallen out of the iTunes Top 40 chart in its fourth day on sale.

The Voice Australia’s season five winner Alfie Arcuri is struggling to have a hit after winning the reality TV show on Sunday night.