Why Reg Mombassa of Dog Trumpet Is A “Gloomy Catastrophist” - Noise11.com 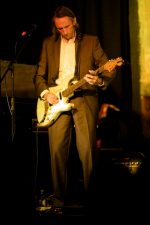 Why Reg Mombassa of Dog Trumpet Is A “Gloomy Catastrophist”

Dog Trumpet’s Reg Mombassa has a simply description of himself, with thanks to his wife.

“My wife describes me as a gloomy catastrophist,” Reg Mombassa tells Noise11.com

Reg says he has been like that since he was a kid. “I’ve probably been a gloomy catastrophist since I was 11 years old or possibly younger than that. It came from growing up in the shadow of the second world war. Both my mother and my father were in the British Army. My father was in the army, my mother in the air force in England and all my uncles were in the army. As a kid I read war comics and I was always frightened that something like the Nazis could happen again.

“When I was 11 the Cuban Missile Crisis happened and that freaked me out. It made me aware than stuff that I generally ignored could effect everyone and cause everyone to be slaughtered.

Maybe the source of Reg’s dark lyrics come from a time more than 50 years ago. “I have had a gloomy view of the human race, its behavior, its history and its propensity to adhere to ridiculous belief systems and be hideously violent in defending their beliefs as ridiculous as they may be,” he says.

Dog Trumpet has been the musical vehicle for Reg Mombassa and his brother Peter O’Doherty since 1990. The new album, their first in seven years, is ‘Great South Road’.

Reg wrote the song ‘Gangrene’. “’Gangrene’ is a metaphor for the human race stupid things to the Earth, to itself, to the animals. I read about someone having gangrene in their arm and it it travelled to the heart it would kill them. I thought Gangrene was a good metaphor for the stupidity that has weighed down the human race throughout its history. Again, it’s a pretty negative song. There is also a reference that talks about ‘beaches wrapped in plastic’ and a ‘river of rusty metal’ in ‘an ocean of oil’. It’s a reference to all the bad things that ruthless competition and ruthless capitalism have done to the Earth.

Listen to ‘You’ve Heard It All Before’:

Listen to ‘At Anytime’:

Peter O’Doherty discusses ‘Not Quite Enough’ and ‘Wallpaper.”

‘Great South Road’ is out now.

Donald Trump has been the Godsend of comedy writers. For the past four years people like Stephen Colbert, Seth Meyers and Jimmy Kimmel have dominated their shows with Trumpisms. Now Harry Shearer has as well.