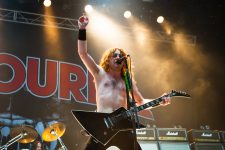 Fuck Airbourne are a fun band! Airbourne was the late addition to Download, added to fill the gap Ozzy Osbourne left.

Airbourne didn’t replace Ozzy. They were slotted in early and Slayer were upgraded to the top. Airbourne hit the stage at exactly 1:50 pm (Download Melbourne went like clockwork) and, let me say it again, Fuck Airbourne were a fun band.

Everything about Airbourne is what Australian pub rock once was. This Warrnambool band are the direct descendants of AC/DC. They have all the attributes of The Angels and Rose Tattoo and all the energy of the three combined.

Taking on a Download crowd was an easy task for Airbourne. They are well-oiled having cut their teeth on music festivals around the world for the past decade. For a band that learned their tricks with a residency at Melbourne’s Duke of Windsor, this is now one hell of an international sounding act.

The Download set only afforded Airbourne 45 minutes so we didn’t get enough time for the full impact. The eight songs spread across the four albums from 2007 to 2016 was indeed high voltage rock and roll.