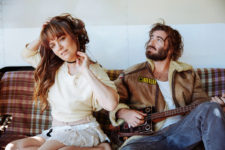 Angus & Julia Stone have released a video for their new song ‘Snow’.

‘Snow’ is the first taste of the duo’s upcoming fourth studio album.

The video, filmed in the Australian desert, was directed by Onil Kotain and produced by Karim Sukarno.