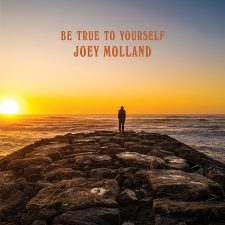 Joey Molland Be True To Yourself

Badfinger were the first group signed to The Beatles’ Apple Records in 1968. The other members were Pete Ham, Tom Evans and Mike Gibbins. Ham died in 1975, Evans, in 1983 and Gibbins in 2005.

Joey performed with George Harrison at ‘Concert for Bangla Desh’ in 1971 and on George’s 1970 ‘All Things Must Pass’. He was also the guitarist on the tracks ‘Jealous Guy’ and ‘I Don’t Want To Be A Soldier’ on the ‘Imagine’ album.

Joey Molland released his first solo album ‘After The Pearl’ in 1983. ‘Be True To Yourself’ is coming on 16 October. It features appearances from Julian Lennon, Micky Dolenz, Jason Scheff and Steve Holley. Julian Lennon also took the cover photos.