Brian Cadd and Kate Ceberano Present A Wonderful One Off In Melbourne - Noise11.com 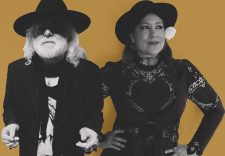 Every once in a while a show happens on a punt. Sometimes it is all about a good idea and the right timing. Brian Cadd and Kate Ceberano sounds like a longshot but it hit the bullseye.

On paper Cadd and Ceberano seem like an odd-couple. They come from difference eras, they perform different genres. However, this was a case of opposites attract. It worked a treat. It’s just a shame it was a one-off.

Brian and Kate mainly performed songs that influenced them and songs they admired as well as a few from their own songbooks. It was a perfectly curated setlist and it often dug deep. Brian’s ‘Legend In The Making’ was such a deep cut I had to ask him where it came from. You’ll need to drill back to the 2005 ‘Quietly Rusting’ album to find it.

Brian’s beautiful ‘Everybody’s Leaving’, paying tribute to the greats we have recently lost came early in the set along with a brand new one from Kate’s new album with Steve Kilbey and Sean Sennett ‘Monument City Lights 1973’.

There were songs from The Band, The Faces, Marvin Gaye, Blind Faith, Bonnie Raitt and John Waite.

Check out the setlist

Legend In The Making (from Brian Cadd, Quietly Rusting, 2005)
How Sweet It Is (Marvin Gaye cover)

Maybe this show will happen again. Maybe it won’t. If it doesn’t, there were 800 very lucky witnesses to this one.