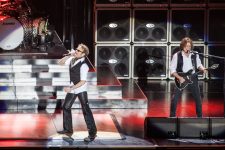 In an interview with the Las Vegas Review Journal, Diamond Dave said “Ed (Van Halen)’s not doing well, and singing and dancing is a perishable skill. If you have the capacity, it’s something that has to be used routinely, if not for the thrill of it and the magic of creating with other incandescent spirits.”

He doesn’t talk about specifics, but according to TMZ, Van Halen was flying to Germany to receive treatment for throat cancer, and he had managed to successfully beat tongue cancer in 2002.

Van Halen had a revolving lineup, with three singers since their formation in 1972. David Lee Roth was replaced by Sammy Hagar in 1986, who in turn was replaced by Gary Cherone in 1996.

Their last album A Different Kind Of Truth was released in 2012.

Check out Van Halen’s Tattoo from A Different Kind Of Truth below: