Debbie Harry's Memoir is out next month - Noise11.com 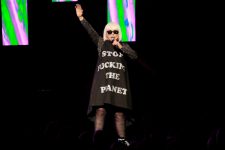 Debbie Harry’s Memoir is out next month

Debbie Harry is gearing up to release her memoir Face It next month – but the star is already talking about a possible uncensored sequel.

The 74-year-old collected the Outstanding Contribution to Music accolade at Britain’s Association of Independent Music’s (AIM) Independent Music Awards on Tuesday. And speaking to Britain’s Metro newspaper, she teased possible “revelations” in the book.

“I didn’t rake anyone over the coals, you know?” she added. “I tried to be sort of open-minded and having an understanding of what it’s like to work in the business and also to work in an ensemble situation.

“It can be very complicated but interesting and surprising. You get some surprising results.”

While fans eagerly await the memoir – which is the Heart of Glass star’s first autobiographical release – she appeared more excited by the idea of a potential follow-up.

“I suppose there are a few revelations in there, but I’m looking forward to writing a real take out the screws book, you know?” Debbie teased. “Even though I’ve been a public person for so long I think I’ve managed to keep a lot of my personal life away, so I think that is yet to come… If anyone is interested… Then I’ll get to it!”

Face It will detail the star’s climb to fame as the lead singer of Blondie in the ’70s and early ’80s, as well as her heroin abuse and experimentation with bisexuality.

It is slated for release on 1 October.