Disturbed’s David Draiman Gets A Face Full of Shark In South Australia - Noise11.com 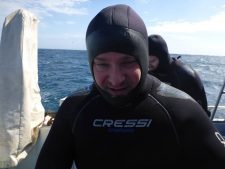 While sharks don’t bite lawyers out of professional courtesy rock stars are fair bait as Disturbed’s David Draiman found out in South Australia this week.

Draiman went shark cage diving at Port Lincoln in South Australia on Friday and told Noise11 the experience was “an adrenaline rush”.

David posted this video of a shark attacking the cage he was in on the Disturbed Facebook page.

Calypso Star Charters have been doing the one-day Shark Diving tours at the Neptune Islands in South Australia since 2006. Friday was a good day for Draiman, who is currently on an Australia tour with Disturbed. Four sharks came along for the meet and greet.