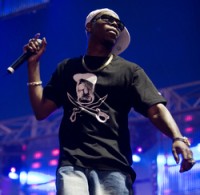 Dizzee Rascal – whose most recent record was 2017’s ‘Raskit’ – has announced plans for the highly anticipated follow-up, and he is set to release ‘E3 AF’ in autumn.

“Pre- order is live this Thursday evening! Keep it locked!! More on the way… #E3AF Too much (sic)”

The title pays homage to his hometown of Bow in East London, which is in the E3 postcode district.

The exciting announcements come after Dizzee claimed he should headline Glastonbury.

He was supposed to perform at the music extravaganza this year but the festival was cancelled due to the coronavirus pandemic, and when it returns in 2021, the rapper believes he ought to top the bill because his appearances have been so popular in the past.

He recently said: “I was supposed to play Glastonbury this year. At this point they need to hurry up and just let me headline that thing. Those sets I played on the Pyramid stage [in 2010 and 2013], got me a headlining reaction – bigger than the actual headliners.

Despite the cancellation of gigs and festivals, Dizzee isn’t feeling “stressed” and is “optimistic” the music industry will return to normal eventually.

He added: “When the first shows started getting cancelled, I just accepted it: that’s that, then. My thing is, the sun’s out and I’m not dead.

“So I’m not too stressed out. There are a lot more important things going on for other people.

“Live shows will come back but I can still go on the radio, my album’s still coming out, I can still reach people. I’m surprised at how positive I’m feeling.”