Garth Hudson To Perform At The Last Waltz 40 Tour - Noise11.com 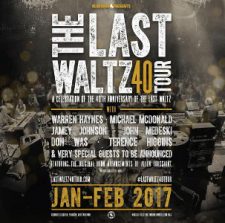 Garth Hudson To Perform At The Last Waltz 40 Tour

When the Last Waltz 40 Tour was first announced, it was said that there would be special guests.

The tour, which celebrates The Band’s final concert, features Warren Haynes, Michael McDonald, Jamey Johnson, Don Was, Terence Higgins, John Medeski and a number of other artists recreating many of the performances from that night on November 25, 1976.

Joan Osborne joined for a couple of the shows but, on Thursday and Saturday of this week, former Band member Garth Hudson will be taking the stage for the show. Hudson has been credited by his fellow band members as the resident musical genius of The Band who helped create their unmistakable sound.

Only keyboard player Hudson and guitarist/singer Robbie Robertson are still alive from the group’s original lineup. Richard Manuel died in 1986, Rick Danko in 1999 and Levon Helm in 2012.