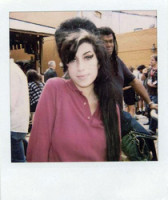 An Amy Winehouse exhibition is to open at Los Angeles’ Grammy Museum next month.

U.S. Recording Academy chiefs told the Associated Press on Thursday that their museum will host items including the late singer’s most famous outfits – such as the halterneck dress she wore during her final performance in Belgrade, Serbia before her death at the age of 27 in 2011.

Handwritten lyrics, home video, journal entries and more items from her family’s personal archive will also go on show when the Beyond Black – The Style of Amy Winehouse exhibit opens on 17 January.

“Amy not only brought her gift of music to the world, but also her fashion. We’re eager for people to see her bold, beautiful spirit through all forms of her creativity,” her father, Mitch, said in a statement.

Although the star only released two studio albums before her death from accidental alcohol poisoning, she won five Grammy Awards at the 2008 ceremony, but could not attend after being denied a visa. She also won a Grammy posthumously, for a collaboration with Tony Bennett, in 2012.

The exhibit will also feature never worn dresses created by the Back to Black hitmaker’s stylist, Naomi Parry, for her cancelled 2011 summer festival shows.

“Working with Amy was one of my most satisfying and creative times in my career,” Parry added. “I’m excited for the world to finally see the looks we created for what would have been her 2011 summer festival tour.”

Many of the items on show will be auctioned off to raise funds for the Amy Winehouse Foundation, which works to help young people suffering from drug and alcohol misuse, in November 2021.