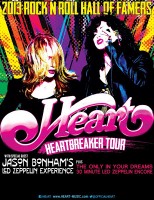 When Ann and Nancy Wilson met Jason Bonham at the Kennedy Center Honors, little did they know that they would be touring together and playing the music of Led Zeppelin.

The Wilson’s performed the Zeppelin classic Stairway to Heaven to close out the awards show last year, a performance that has gone viral on-line. Bonham was also at the ceremony that included an honor for his late-father’s group. It’s not the only Zeppelin song that Heart has performed over the years in concert as they’ve also covered Rock N’ Roll, among others.
For the tour, look for Bonham’s group to open followed by a set by Heart and a thirty-minute performance by the two artists together closing the show with a half-hour of Zeppelin music.

Ann Wilson said of the pairing “Nancy and I and the rest of Heart are thrilled to be playing with Jason and his band this summer. Awesome rock ‘n’ roll music everynight…miracles apt to happen any old time.”

Sister Nancy added, “It’s not a tribute as we have the blessings of the gods themselves.”

Bonham also enthused “What a great night it was for us at the Kennedy Center awards, and now to be able to do it again on the road with Ann and Nancy is such an honor for me. I am really looking forward to taking my Led Zep Experience show out this summer with Heart and to join them in a Zep-a-thon closing the show as well. Just fantastic!”