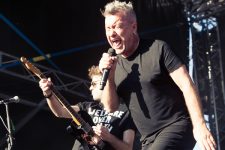 Jimmy Barnes at One Electric Day Photo by Ros O'Gorman

Rock legend Jimmy Barnes has called on Australian Prime Minister Scott Morrison to reverse his decision to cut funding to the Foodbank as we lead into Christmas.

In a tweet Jimmy said, “Cutting the funding for Foodbank is not OK. Cutting it right before Christmas is criminal. Prime minister, please reconsider this decision”.

Cutting the funding for Foodbank is not OK. Cutting it right before Christmas is criminal. Prime minister, please reconsider this decision. #AusPol https://t.co/wJZWthTSQK

Australia’s Liberal Party has a atrocious track record on human rights and has now taken $323,000 for assistance with food out of the mouths of Australia’s neediest families.

Foodbank assists 710,000 Australians experiencing economic hardship or who have been affected by natural disasters. The cutting of $323,000 now leaves $430,000 for an organisation that ran on $1.5 million a year just three years ago.

Morrison has a warped concept of charity and Christianity. Just weeks ago when his Liberal Party candidate Dave Sharma was slaughtered in the Wentworth by-election Morrison said in the concession speech “we believe that the best form of welfare is a job. We believe it is every Australian’s duty to make a contribution and not take a contribution”. It is a cruel philosophy that is at the heart of the rot of the Liberal Party today.

Alternate Prime Minister Bill Shorten has an opposite view. “The Liberals have cut $323,000 from Foodbank Australia – an organisation that puts food on the table for hundreds of thousands of Australians in need, many of them children. I’ve written to Scott Morrison urging him to reverse his mean and foolish decision,” he said.

The Liberals have cut $323,000 from Foodbank Australia – an organisation that puts food on the table for hundreds of thousands of Australians in need, many of them children. I’ve written to Scott Morrison urging him to reverse his mean and foolish decision. pic.twitter.com/oWDWDcppGl

If the latest Newspoll is an indication Morrison’s Liberals are heading for a wipeout at the next federal election, either in March or May. The party went further back today. Labor now has a 10 point lead of Liberals 55% to 45%.

The Australian government has now reversed its decision to cut Foodbank.

Thank you Prime Minister @ScottMorrisonMP for restoring our essential funding and for providing vulnerable Australians with certainty. We are proud of the work we do to support people in crisis and welcome this decision.