Judge Denies Joey Kramer The Right To Perform With Aerosmith At The Grammy Awards - Noise11.com 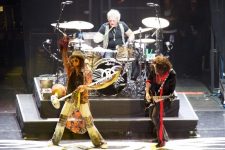 Joey Kramer’s has been denied the right to perform with his band Aerosmith at the Grammy Awards this weekend.

Kramer, who stood down from Aerosmith in 2019 for health reasons, wanted to perform with the band at the 2020 Grammy Awards. Aerosmith said no, so he sued them.

In a statement to Noise11.com, Kramer says:

Although I’m extremely disappointed by the Judge’s ruling today, I respect it. I knew filing a lawsuit was a bit of an uphill battle considering that the corporate documents don’t reference any process for a band member returning from an injury or illness. However, the band waited until January 15th to tell me that they weren’t letting me play at the awards ceremonies this week. I can hold my head high knowing that I did the right thing – to fight for my right to celebrate the band’s success that I have dedicated the better part of my life to helping build.

The truth speaks for itself. Ever since I injured my foot last August and went through many hours of physical therapy to heal, not once did the band in its entirety offer to rehearse with me. That is a fact. I was also sent the full rehearsal schedule on January 18th and flew to LA the next day to rehearse and have many texts and emails stating the band can’t wait for my return. That’s also a fact. When I showed up to rehearse, I was greeted by two security guards who prohibited me from entering as you can see in the video clip.

The band’s offer to allow me to participate in this week’s MusiCares and Grammy celebrations for red carpet photo ops only, is appreciated; however, with a fill-in drummer playing on stage at two events honoring our collective musical contributions, it is extremely hurtful to me. I am a professional musician who is eager to return to my rightful place with Aerosmith.

I want to thank my fans for the incredible outpouring of support and for sharing my goal of taking my place on stage as one of the five founding members of Aerosmith and continuing to play the music I love.