Kanye West has an all-star turn-out for this Sunday Service - Noise11.com 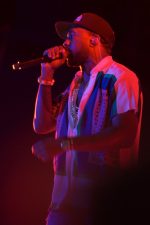 Lil Yachty, T.I., 2 Chainz, and Nelly were among the rap elite who attended Kanye West’s latest Sunday Service gospel breakfast in Georgia at the weekend.

West and his choir hit Atlanta on Sunday and Kanye made a rare sermon appearance, telling the crowd he cherished his relationship with God.

“The power of God can’t be calculated by a number, by a first week sale, by a bank account, by how many cars you drive, by how big your house is and how many acres you got,” he stated.

West also confirmed his new album, Jesus Is King, will be released on 27 September (19).

Following the latest Sunday Service, Kanye headed off to Indiana to support his spiritual mentor John Boyd’s daughter, Victory, at a gospel concert in Batesville.

Boyd’s band Infinity’s Song, who are signed to JAY-Z’s entertainment agency, Roc Nation, were staging the show at Walhill Farm to raise funds to cover the costs of an upcoming tour.

Kanye, who didn’t perform, has described Victory and her siblings as “the future of music”.

Meanwhile, the rap superstar is recording new music with easy listening icon Kenny G after booking the saxophonist to perform in a roomful of roses on Valentine’s Day – a gift for his wife Kim Kardashian.

Kenny G has confirmed he and Kanye have been in the studio together recently, telling The Dallas Observer, “I can’t really say much… because he (West) doesn’t really want anyone to talk about music before he releases it. Just suffice to say that we’re collaborating on some things, and nobody knows what’s going to happen.”