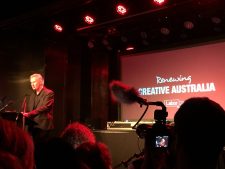 Labor Promises Return to Support of Creative Industries After Election

The Australian Labor Party has promised to refocus attention to Creative Industries in the Arts and Entertainment if successful at this weekend’s election.

For the past six years the Liberal Party has vandalized the creative arts lying about cuts to the ABC, sabotaging the roll-out of the NBN and the dilution of support to contemporary music in general. As far back as the Brandis era, the Liberal Party began butchering the industry with cuts to the Australia Council and by damaging the small-to-medium and independent sector of the industry.

Labor will restore funding cut by the Abbott-Turnbull-Morrison circus, returning $37.5 million to the Australia Council. This will be used to correct the underfunded sectors in Literature, Visual Art and works from the small, medium and independent sectors.

In the Arts Policy introduced by Tony Burke MP at The Espy, St Kilda last weekend Labor promised to restore the Creative Economy.

Labor will convene a Creative Economy Summit to gather the best ideas to boost and accelerate Australia’s creative economy.

The summit will inform the development of a Creative Economy Strategy 2030 to harness and facilitate the cultural and industrial benefits of Australia’s creative skills and industries over the next decade and beyond.

The strategy will link to goal 5 of Creative Australia which is to ensure Australian creativity thrives in the digitally enabled 21st century by supporting innovation, the development of new creative content, knowledge, and creative industries.

The Arts Policy will be driven by Tony Burke MP, who will assume his role as Minister for the Arts if successful following the 2019 election on 18 May 2019.

Tony Burke held the portfolio in 2013 under both Kevin Rudd and Julia Gillard.